“We have a whole line of stand-on skid steers that have done really well and we wanted to look at ride-on skid steer machines and whether we could mount those capabilities on a stand-on skid steer,” says Chris Thompson, Ditch Witch compact equipment manager. “This gives you the benefits a skid steer plus the ability to easily get on and off.” 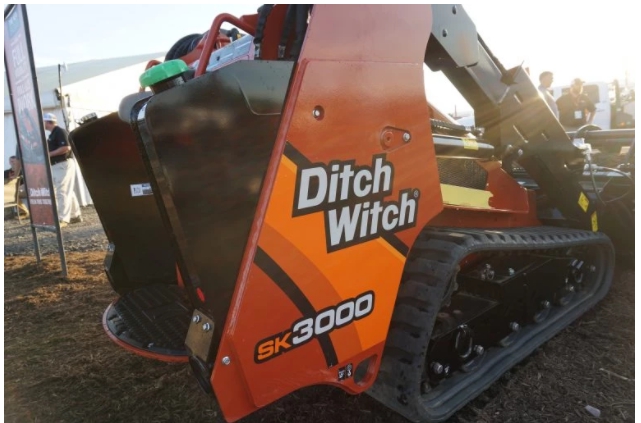 How did Ditch Witch get to a 3,100-pound ROC? “A lot of it has to do with center of gravity,” Thompson explains. As to opposed to a skid steer or compact track loader with a cab, space is more compressed on the   CUL. Ditch Witch also added weight via welded-on steel panels to the back of the machine.

In addition, the tracks were redesigned. “Before we had more of an open design, but with the weight of the machine now at 7,600 pounds, we needed to support the rollers better,” Thompson explains. The company now uses a capture roller design to both protect them and take the weight off the rollers.

The SK3000 delivers 5,000 pounds of breakout force and directs up to 51 horsepower to the attachment, which the company says is more than any other machine in its class. The unit features dual-auxiliary hydraulics. “Users can grab, lift and rotate a log at the same time, for example,” Thompson says.

Users key in a code to start the SK3000; the machine uses a manual throttle instead of the previous push-button throttle on the display. “This gives operators the ability to feather it a bit more,” Thompson says.

The SK3000 has been under development for about three years, Thompson says. “This for people who want stand on and get off the machine quickly, have that visibility and not be limited as far as lifting capacity.” Key markets will be the tree industry, landscaping and hardscaping industry.

“Everyone is using two machines on the jobsite: one to offload a truck and one to do the work. We wanted to give them one machine for both jobs.”